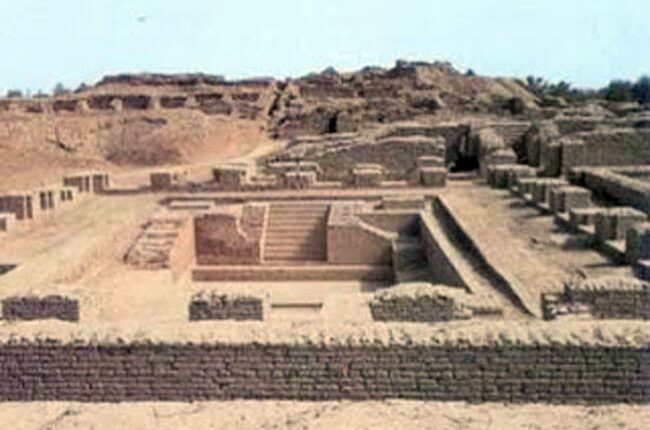 Indus valley civilization: From the beginning of 4th milennium BC, the individuality of early village cultures began to be replaced by a more homogenous style of existence. By the middle of 3rd millennium, a uniform culture had developed at settlements spread across nearly 5,00,000 square miles, including parts of punjab, uttarpradesh, gujarat, baluchistan, sindh and makran coast. It was a highly developed civilization and derived its name from the main river of that region- river indus. The cities were far more advanced than their counterparts in prehistoric egypt, mesopotamia or anywhere else in western asia.

The chief male deity was pashupati mahadeva  (proto- siva), represented in seals as sitting in a yogic posture on a low throne, and having three faces and two horns. He is surrounded by four animals (elephant, tiger, rhino and buffalo), each facing a different direction, and two deers appear at his feet. The chief female deity was mother goddess, who has been depicted in various forms.

There is sufficient evidence for the prevalence of phallic worship also. The worship of fire is proved by the discovery of fire altars at lothal, kalibangan and harappa. Indus people also worshipped gods in the form of tress(pippal) and animals (unicorn). Further they believed in ghosts and evil forced and used amulers as protection against them.

Three forms of burials are found at mohenjodaro, viz. complete burials, fractional burials (burial of some bones after the exposure of the body to wild beasts and birds) and post cremation burials. The general practice was extended inhumation- the body was lying on its back with the head generally to the north.

Inter regional trade was carried on with Rajasthan, Saurashtra, Maharashtra, South India, parts of Western Uttar Pradesh and Bihar. Foreign trade was conducted mainly with Mesopotamian and Bahrain. Trade was carried on by land as well as overseas transport. There is evidence of sea and river transport by ships and boats in several seals and terracotta models, apart from the dockyard at Lothal. The Sumerian texts refer to trade relations with Meluha which was the ancient name given to Indus region and they also speak to two intermediate stations called Dilmun (Bahrain) and Makan (Makran coast).

Harappan pottery is bright or dark red and is uniformly sturdy and well baked. It is chiefly wheel made, and consists of both plain and painted ware, the plain variety being more common. Harappan people used different types of pottery such as glazed, polychrome, incised, perforated and knobbed. The glazed harappan pottery is the earliest example of its kind in the ancient world. On the whole, harappan pottery was highly utilitarian in character, though the painted designs on some pieces show a remarkable artistic touch.

They are the greatest artistic creations of the Indus people. Most commonly made of steatite(soft stone). Majority of seals have an animal engraved on them with a short inscription. Unicorn is the animal most frequently represented on the seals. Main type (1) the square type with a carved animal and inscription. (b) the rectangular type with inscription only.

After 2000 BC, the Indus culture slowly declined and gradually faded away. Some ascribe this to the decreasing fertility of the soil on account of increasing salinity caused by expansion of the neighbouring desert. Others attribute it to some kind of depression in land, which caused floods. Still others point out that the Aryans destroyed it.

According to some scholars, decline of trade, particularly oceanic trade with Sumerians, must have contributed partly to the decline. Even though there are various theories for the downfall of this civilization, the most accepted version is that of ecological imbalance.